This is the article on the race of experimental immortals. For the rulers of Kotaku, head to Lord Tensen.

Tensens (天仙, Tensen?, Literal meaning: Heavenly Hermit) are synthetic humans that were believed to have been the product of a combination of Xu Fu's mystic Tao and Plant Tao. The name also serves as a title for second high ranking Sennin.

In truth, the Tensens are actually six unique Tao puppets created by Rien that were born from one single puppet of herself.

Tensens appear to resemble humans with colored, plant-like hair (with the exception of Rien and Mei), and golden-colored eyes and eyelashes. A hidden trait that all Tensens have is the fact that they all share the same facial features and voices either when they are in their Yin or Yang form, as evident by Chōbē who found it difficult to distinguish the Tensens from one another after donning the same clothing and taking on their Yang forms during a ritual.

Tensens are more human-like on top of their appearance as they have shown degrees of individuality, intelligence, and are able to express emotions. Since their bodies don't confine to one form of sex, the Tensens have preferences in which gender is better suited for each of them. They cooperate very well and are able to see each other as a family. However, they can express cruelty to each other if they fail in a task and can disown one of their own if they are not willing to cooperate. They view humans merely as products to create more Tan and have each shown to have a low opinion on them. Ju Fa sees them as inferior creatures, Mu Dan finds them to be material he can modify and later turn into his "toys", and Rien sees them as "ingredients" in completing his research. Despite their distaste for humans, they can admire them for their strength or for a unique quality and can talk casually towards them, with the case of Tao Fa.

Tensens are structured similarly to humans, possessing the same anatomical features inside and out. Since their bodies are plant based, they possess a plant ovule located within their tandens that acts somewhat like their hearts. If attack directly, the ovule is functioned to defend the Tensen by pulling out any weapons impaled in it or invading the body of the attacker using vines. It has been shown by Zhu Jin that as long as the ovule remains intact a Tensen can still continue to live and move about even without a body. Other than the ovule, it is unknown if a Tensen possesses any other internal organs.

Although Tensens are capable of bleeding, they do not feel any pain no matter how critical the injury is, unless it is from a hindering Tao attribute attack, especially towards their tanden. Also, while Tensens are able to have sexual intercourse they are incapable of breeding naturally, instead being artificially born. They go through the normal growth stages as a human being, starting off as infants until they reach adulthood, however, they have a slow growth rate as they maintained their youth for centuries before the invention of Tan. Tensens are able to eat and drink (although it is unknown if they feel the need to or do this out of pleasure) but mainly consume Tan.

A Tensen's sclera will turn black whenever they feel a sense of excitement or anger. With the case of Gui Fa, their sclera are permanently darken.

After consuming the elixir known as Tan, each Tensens Tao reserves are extended and are able to have continuous usage of it than humans. For years of training, the Tao of each Tensen have been greatly refined and go beyond human limitations. With their knowledge and great mastery of it, many have view them to that of the gods. Their combat abilities are heighten to immense levels, due to the many years of training, and are able to easily fight and defeat strong opponents such as the collaborative efforts of the Aza brothers, the strong fighting genius Gabimaru, and Yamada Asaemon Shugen, the strongest Asaemon in the Yamada clan. As Sennin, they are able to use a technique that is exclusive to them called Distant Strike where they can launch their Tao as an invisible projectile.

Though they are powerful with Tao, they are not truly invincible and are able to suffer drawbacks. If a Tensen were to use too much of their Tao they will die unless they consume more Tan. This usually occurs whenever they enter their Kishikai forms.

Having been born from Plant Tao, the Tensens are blessed with powers of regeneration. They can heal any damage they take no matter how severe, such as lost limbs, and are even able to grow back their entire heads. The regeneration process show as vines emerging from their bodies and bringing back what was lost to its original state. A rule to this regeneration is that a Tensen can only be brought from their torso, or a portion of their lower bodies, if they are destroyed from the waist up. According to Mei, a Tensen can regenerate up to 100 or even 1,000 times. For example, after having their body cut 215 times by Shion, Zhu Jin was still able to come back alive. The time it takes for their bodies to regenerate happens in a matter of seconds. They can also delay the healing if it's for a purpose. Any lost limbs or bodies that are present will immediately turn into vegetation or a lifeless corpse.

While organisms normally possess chi of either Yin or Yang, Tensens possess both energies that allows them the freedom to assume either a male or female body. By having both chi's flow and revolve inside their bodies, the Tensen's Tao is greatly augmented and can be use to recover their lost Tao.

With the case of Gui Fa, a Tensen can obtain a body that combines the two genders in order to have the cycle of Yin and Yang continue to flow so that they may mold more Tao. However, Zhu Jin noted that this feat is not a simple task to accomplish easily.

Tensens are able to unleash a monstrous transformation known as a Kishikai (, Kishikai?). The Kishikai transformation acts as a last resort for the Tensens whenever they are backed up in to a corner with their opponent, offering them a tremendous boost in power that allows them to overwhelm their target. If they enter the transformation after having their bodies experience too much damage, a Tensen's mind will become unstable and will lose control of themselves. The Kishikai appearance differs from each Tensen but their bodies are generally represented with a combination of their Yin and Yang forms (with the exception of Mei). The Kishikai form comes with a risk, however, as it uses up a lot of the Tensens Tao within half an hour, and by the time the transformation ends they are reduced to their weaken elderly bodies and will need time to recover through the cycling of chi or the consumption of Tan. 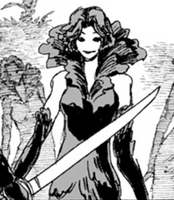 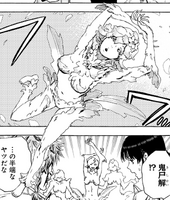 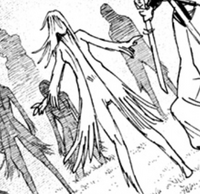 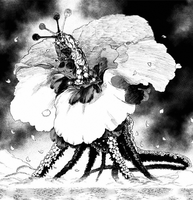 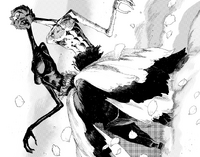 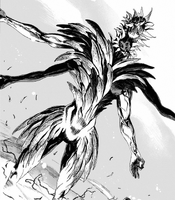 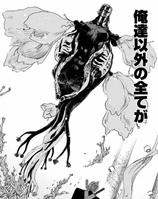 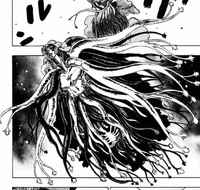 The regenerative abilities of the Tensens is not entirely full proof to all attacks. Since Plant Tao is used for their regeneration, a Tensen is vulnerable to the hindering Tao cycle. If a Tensen receives an attack from a Tao user with a hindering attribute, the regeneration process will be weakened and will be left with scars done to their bodies by the time their wound is healed. Also, repeated damage done to the Tensen's body will result in them expending too much Tao, causing their regeneration to stagnant, as well as have them be reduced to their weakened bodies. The only way to truly kill a Tensen is if a Tao user with a hindering attribute completely destroys the Tensen's tanden located at the navel or their plant ovule.

Retrieved from "https://jigokuraku.fandom.com/wiki/Tensen?oldid=10373"
Community content is available under CC-BY-SA unless otherwise noted.