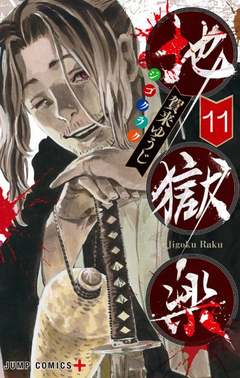 Volume 11 of the Jigokuraku manga.

With the Zhu Jin-fused Banko becoming a problem in their plans to escape the island, the remaining surviving criminals and Asaemons from the first team ally with Yamada Asaemon Isuzu, Yamada Asaemon Kiyomaru, and Yamada Asaemon Jikka in order to destroy the monster and proceed their way to the floodgates. As stated by Mei, the group must pair up with the person with the right Tao attribute for strengthening and destroy the monster's five elemental tandens scattered around the palace simultaneously before they suffer the risk of Arborification around morning. However, each duo are met with a hinderance after the tandens create clones of the members of Lord Tensen to fight them off. Meanwhile, Gabimaru and Sagiri face a more troublesome matter after Shija approaches them with the drive to fight Gabimaru to the death. Gabimaru finds himself in a tight spot against the shinobi but manages to unlock the strength to stand up to them once again after being reassured of something very important. 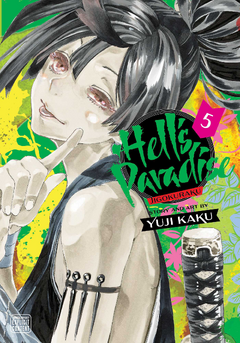 Volume 05 of the Jigokuraku manga.

Sagiri, Yuzuriha, and Senta defend themselves against the powerful Tao user, Mu Dan, and manage to endure long enough to take him down. However, the Tensen recovers by entering their Kishikai and causes Senta to undergo Arborification. Sagiri and Yuzuriha stand helpless after running out of power but are saved by Shion who takes on the challenge of battling against the monster. With the help of Sagiri and Nurugai, Shion manages to kill Mu Dan and brings the battle to an end. The survivors then puts Senta's body to rest and takes refuge inside Hōrai to discuss matters. Yuzuriha tells Shion that, according to Mu Dan's reveal earlier, the Elixir of Life does not exist, but is told by Sagiri that Gabimaru told her that his village leader gained immortality because of the elixir. Yuzuriha gives a theory as to how this became possible and connects this to Gabimaru's wife that utterly shocks Sagiri in the process. In a cave, Gabimaru awakens from his unconscious state but does not seem to remember Gantetsusai, Fuchi, or Mei, as well as why he is on the island in the first place, and only seems to recall his past life as "Gabimaru the Hollow". After coming to the conclusion that he is on a Iwagakure mission, Gabimaru decides to play along with the three until he can figure things out later. The next day, the group walk their way up the valley to reach the Hōrai gate but suddenly run into Chōbē and Tōma. After Chōbē attacks the shinobi, Gabimaru attempts to dispose of him quickly by snapping his neck but soon finds out that killing him will not be so easy.