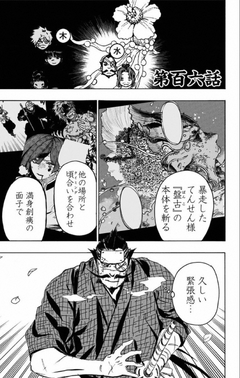 Chapter 106 of the Jigokuraku manga.

At the main body of the Banko, Gantetsusai focuses on preparing himself to cut down the giant flower in front of him. Meanwhile, Jikka decides to lay down and puts his faith in Gantetsusai. Gantetsusai interprets his unfazed behavior as a test of courage and wishes to follow along as well, which Jikka found to be strange. He then hears the signal to take action but is told by Jikka that the roots will tell them when the tandens have been destroyed and when the right time to destroy the Banko. Gantetsusai wonders how he is able to figure this out, which Jikka answers that he has been able to understand how things move ever since he was young and explains his moto of being patient. Gantetsusai then senses that he is up to something but can't seem to tell what his intentions are. Shija explains to Gabimaru that due to Iwagakure's influence Yui possesses no emotions and has been merely set up to fake a relationship with him as a way to mask the deaths that had been committed. They then begged for Gabimaru to revert back to his former self the way they remembered in the past. After hearing Shija out, Sagiri smiles as she looks up at Gabimaru standing back up.

Retrieved from "https://jigokuraku.fandom.com/wiki/Template:Latest_Chapter?oldid=8209"
Community content is available under CC-BY-SA unless otherwise noted.