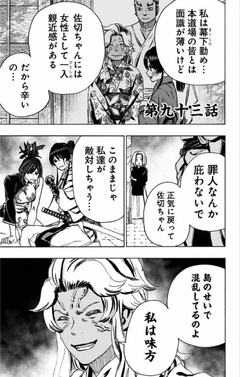 Chapter 93 of the Jigokuraku manga.

Isuzu remembers the time she felt a connection with Sagiri when they first met since they were females in the Yamada clan and asks that she come to her senses. Meanwhile, Gabimaru watches as the two shinobi, Kinkakubo and Ginkakubo, use Transformation Jutsu to reform their faces into the Iwagakure chief and Yui but says that he is not fooled by their scheme. Gabimaru figures that the next Gabimaru must be Shija, which the two verified and tells him that Kumokiri, along with two others have also died. They also insisted on telling Gabimaru that Shija killed the other candidates and that they still view him as the true Gabimaru, much to Gabimaru's annoyance. Gabimaru then wishes to know what the real reason for Iwagakure to be involved with the mission, however, Kinkakubo responses saying that it is a mystery to them what the chief is actually plotting. After they hear the sounding of the conch, signalling that they have acquired the Elixir of Life, Kinkakubo humbly asks Gabimaru to end his life by licking Ginkakubo's toxic saliva while adding that his honor will be preserved in Iwagakure.

Retrieved from "https://jigokuraku.fandom.com/wiki/Template:Latest_Chapter?oldid=6909"
Community content is available under CC-BY-SA unless otherwise noted.