Ju Fa (ジュファ, Jufa?) was a member of Lord Tensen, as well as one of the rulers of Kotaku. He wore the title of Heavenly Ashuku Taitei (ア, Ashuku Taitei?) as part of a façade to maintain control over the Hōko.

Ju Fa had golden eyes, eyelashes and yellow long locks of hair. His attire consisted of a pale yellow robe underneath a haori, a beaded necklace with a golden flower amulet, a loose black hanfu, a white hakama tied with a black obi, and black boots.

In his and Tao Fa's Kishikai state, their bodies melded together to create a large, bulb body, resembling somewhat like a heart, formed from their Yin and Yang bodies, with unusually shaped petals acting as feathers/wings, and vines protruding from the bottom as tails. The head of the Kishikai possessed four faces, two from the left being Ju Fa's Yin and Yang faces while the right being Tao Fa's. Upon switching to their defensive form, the body releases multiple spore vines and their faces switch places. According to Fuchi, he felt that their Kishikai was the embodiment of "love".

Ju Fa after removing his robes. 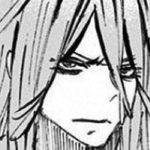 Ju Fa's face close up in their Yang form.

Ju Fa's face close up in their Yin form.

Ju Fa as an infant.

Ju Fa as a child.

Ju Fa and Tao Fa's combined faces in their Kishikai.

Ju Fa was very short tempered and had aggressive tendencies towards anything that irritated him at the slightest, which also applied to his fellow Lord Tensen members. While its true that all members of Lord Tensen have a negative view on humans, Ju Fa was the one that truly despised them with a passion and believed that they are nothing more than "livestock" in creating more Tan and goes as far as to not address them properly, instead referring to any one of them he encounters as being an "it". He was very protective of Tao Fa since they had been by each others side from the moment they were born. He sympathized with Tao Fa's deep sorrow of wanting to end Lord Tensen's pursuit of immortality and did not look at her as being mentally ill but rather viewed the world they live in as madness. Ju Fa found the male gender to be well-suited for them because of their moods and how they are able to easily handle situations.

1,000 years ago on Kotaku, Ju Fa and the other Tensens were created from the Tao of Xu Fu and Plant Tao for the purpose continuing on his research of acquiring immortality. Upon his and Tao Fa's birth, Rien stated that the two were special in that they are in fact two of a whole. The five then began their training led by Rien as children, though Ju Fa came to dislike his studies. Despite their ability to heal themselves, Ju Fa hated when Tao Fa got hurt and was told by Mei that he cared greatly for Tao Fa as his partner. The six were then introduced to the Hōko as tools they could use to replenish their Tao and were assigned the five forms of training in immortality by Rien, with Ju Fa and Tao Fa being assigned as partners in Bōchū Jutsu. While engaging in Bōchū Jutsu, Ju Fa hears Tao Fa express her pity about using the Hōko as tools, to which he says that he feels the same way as well. As the Tensens training regiments started to grow more brutal, Ju Fa stayed by Tao Fa's side in order to protect her.

After 200 years had passed, the Hōko started undergoing Arborification and left the Tensens at risk of dying. Ju Fa expressed their dilemma in frustration and fears that either he or the others have gone into madness through the endless training. He later enters the floodgate to find Tao Fa and Mu Dan preparing to send out a boat with a bloomed Hōko corpse in order to lure in humans to the island as replacements. Ju Fa asks Tao Fa if she was willing to do this, to which she answers yes. He then comforts her and agrees to cooperate, believing that it is okay to use the humans for their own use.

While engaging in Bōchū Jutsu with Tao Fa as a female, the two are interrupted with Aza Chōbē and Aza Tōma's appearance. Ju Fa questioned why humans are on the island and if the Sōshin were not doing their jobs in killing them. Ju Fa then transforms into their Yang form and angrily declares that he will kill them. After defeating the two brothers, Ju Fa throws them down the Tan pit.

He later joins with his Lord Tensen members to discuss matters about the humans on the island. He looks towards Zhu Jin in disappointment after failing to eliminate the humans and being reduced of his Tao. After blowing up Zhu Jin's head, Ju Fa is scolded by Rien for this action. He then reports to him that he sent the humans he encountered down the pit, however, Rien warns him that they should not be underestimated. The group then toast to their longevity and to Soshi.

Later, Ju Fa participates in Bōchū Jutsu with Ran in the bed chamber. After finishing, Ju Fa is offered a cup of Tan from Tao Fa and asks about where Mu Dan was.

After Rien allows Chōbē to join them, Lord Tensen introduces to him the Hermit Ascendance Rite. Once the ritual was over, Tao Fa prepares to introduce herself to Chōbē but is told by Ju Fa not to do so since they should only see him as "livestock". He then attacks Chōbē after the two exchange insults but has his attack blocked by the human. Ju Fa is then ordered by Rien to stand down since Chōbē is his guest. Later, Rien initiates the Rite of Just Consumption after they are informed by Chōbē that the human survivors will eventually make their arrival to the palace and agrees to cooperate as long they don't harm Tōma.

After the humans enter and fell into their trap, Ju Fa, Tao Fa, and Chōbē encounter Tōma, Gantetsusai, and Fuchi in the Bōchū Jutsu Temple. Chōbē persuades Tōma to join Lord Tensen and has him walk upstairs. However, Chōbē betrays Ju Fa and Tao Fa by attacking them with his younger brother's help. Ju Fa regenerates from his injuries and becomes mad after they harmed Tao Fa. He then fights the brothers but finds that they have become stronger than the last time they met. Ju Fa becomes irritated with his difficulty in fighting Chōbē and Tōma and decides to ignore the ritual by coming at them with the intent to kill.

During his battle with the brothers, Ju Fa senses that Tao Fa is in danger. Ju Fa tells Chōbē and Tōma that they are fools in thinking that they can defeat them and says that the only thing they have in common is that they believe that a pair is more than enough. He reaches out to Tao Fa transformed and join together.

Ju Fa and Tao Fa first unleashes a loud screeching cry to cause pain to their opponents ears and releases multiple spores to infect them. Chōbē jumps up transformed to attack them and cuts Tao Fa's tanden, causing them pain. They fight back by attacking with vines and has him crashing outside the temple. After sending him back into the room, Chōbē and Tōma agree to cooperate with Gantetsusai and Fuchi in fighting against the fused Ju Fa and Tao Fa. Ju Fa and Tao Fa attack again with vines but have them blocked by Chōbē. Tao Fa's tanden is then cut by Fuchi whose Tao is strengthen by Tōma. The two flee just before Gantetsusai jumps to deliver his attack and changes to their defensive form. The Tensens attack with their vines and cause the four humans to struggle. However, after entering the pool to get below their body, Gantetsusai slashes through the Kishikai body, separating Tao Fa and Ju Fa and leaves them vulnerable to have their tandens destroyed by Chōbē and Fuchi.

Ju Fa's tattered body climbs out of the pool and attacks Chōbē as they stresses out over Tao Fa. Chōbē then pulls out two bottles of Water Tao, he stole from Rien, out of his stomach and pours it over Ju Fa to stop them from regenerating. They are then cut in half by Gantetsusai to deliver the final blow. In the afterlife, Ju Fa apologizes to Tao Fa about not being able to protect her. They then embrace each other after Tao Fa says that she was glad that he was her partner.

As one of the rulers of Kotaku, Ju Fa has partial authority over everything that goes on and can command the Dōshi, Mōnshin, and Sōshin. He was strong enough to easily defeat the Aza Brothers in a short amount of time no less.

Ju Fa was skilled in hand to hand combat, being able to easily defeat the Aza Brothers during their first encounter. Although Chōbē managed to block his attack after the second time they met, Ju Fa showed enough physical power to damage his hand.

Ju Fa possessed Fire-attributed Tao and had complete mastery over it. Having spent 1,000 years of training, Ju Fa's Tao was greatly refined and his usage could be seen as being god-like. With its use, Ju Fa could sense the presence of others, the movements and weak spots of his opponents, and enhance his physical attacks.

As a Tensen, Ju Fa possessed regenerative abilities and immortality to a certain degree. After having his upper body chopped off by Chōbē, Ju Fa was able to instantly regenerate his body. Ju Fa's regeneration could only be nullified if he were to face an opponent that possessed the Water Tao-attribute and the only known way of killing him was if the said Water Tao user completely destroyed his tanden.

Ju Fa was able to switch chi's of either Yin or Yang to augment their Tao and recover any lost. As Ju Fa switched in and out, their sex changes to match the chi which was put to use whenever they engage in Bōchū Jutsu training.

As a Tensen, Ju Fa was able to enter into a Kishikai state, however, unlike the other members of Lord Tensen, Ju Fa must fuse with Tao Fa as a requirement. Once entered, the two were capable of flying at high speeds, despite their large body and unusual feathers/wings, and could release a powerful shriek to cause pain to their opponents eardrums. By opening their combined heads from the middle, Ju Fa and Tao Fa could release vines to slash and pierce their enemies and use the vines from the bottom of their form to create and scatter multiple spores to infect their opponents mental state, causing them to laugh uncontrollably, or launch them with high velocity as bullets.

When entering into their defensive form, their Kishikai create multiple spore vines from their body to add to their attack power.

Retrieved from "https://jigokuraku.fandom.com/wiki/Ju_Fa?oldid=8830"
Community content is available under CC-BY-SA unless otherwise noted.