Hōrai (ほうらい, Hōrai?) is the center region of Kotaku and is under the rule of Lord Tensen where they live, train, and conduct experiments. The Dōshi also reside in Hōrai as students and servants of Lord Tensen.

The palace is constructed as a massive fortress modeled after China's Epang Palace. Since it is constructed like a traditional palace, it is divided between a large inner castle and outer structures.

Within the inner castle are temples (宮, Miya?, Viz: Sanctums) based on the five training methods of immortality each Tensen specialize in. The palace's interior follow the principles of Feng Shui to have "harmony" with the surrounding environment. Ryumyaku is applied by constructing buildings and artifices atop of places with great outpours of Tao energy, while also applying Ryuketsu by designing their corridors, roads, etc. along the paths where they flow. However, since the Ryuketsu is liable to change, the palace is constantly renovated to maintain the harmony. 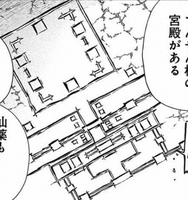 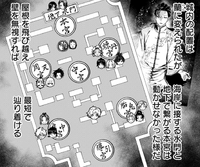 The layout of the palace after Ran's renovation.

Hōrai is protected by a wall and can only be entered through a massive gate.

The outer section is surrounded by golden mystic statues and leads to a building that connects to the palace through a bridge. The house holds a supply of clothing and a bed that either serves as a guest house or a storage room. After Mu Dan's rampage, the outer section became partially destroyed. Upon his death, Mu Dan's Kishikai corpse remained lying and filled the area with peony flowers.

The Taisoku Temple (胎息宮, Taisoku Miya?, Viz: Taisoku Sanctum) is the domain of Zhu Jin. The temple focuses on Taisoku — immortality through breathing techniques. The training area is structured with a bridge and two pools with candles on top of lily pads.

The Dō'in Temple (導引宮, Dō'in Miya?, Viz: Dō'in Sanctum) is the domain of Ran. The temple focuses on Dō'in — immortality through exercise. The temple also serves as an area for the Hermit Ascendance Ritual.

The Shūten Temple (周天宮, Shūten Miya?, Viz: Shūten Sanctum) is the domain of Mu Dan. The temple focuses on Shūten — immortality through pathways of the body and organs. The training area has a wide collection of literacy.

The Rentan Temple (煉丹宮, Rentan Miya?, Viz: Rentan Sanctum) is a laboratory where Rien conducts his experiments. It was previously owned by Mei until her banishment. The Tan elixir is said to be housed there.

The Main Temple (本宮, Hongū?, Viz: Main Sanctum) is where Xu Fu resides and houses the Banko, a giant Waitanhua flower that is meant to complete Rien's research in creating high quantity Tao.

Sometime ago, while dealing with the human travelers, a new training area was added that combines the five training studies of immortality. The training area is set up similar to a resort area. As explained by Rien, the outdoor pool allows for underwater exercises and breathing practices that employ's training in Dō'in and Taisoku, while the music played by the Dōshi allows for meditation that employ's training in Shu'itsu and Shūten. There are also bedchambers for Bōchū Jutsu training. The training area is located near the Bōchū Jutsu temple.

Deep within the palace is a floodgate containing numerous ships. In preparation for when he perfects the Tan elixir, Rien constructed the ships to travel to the mainland and initiate his plan of turning every human into Tan.

Retrieved from "https://jigokuraku.fandom.com/wiki/H%C5%8Drai?oldid=8132"
Community content is available under CC-BY-SA unless otherwise noted.