Hōjō (ほうじょう, Hōjō?) is the second region of Kotaku that leads travelers to the Hōrai gate. It is where the Sōshin nest and acts as a graveyard for the Arborified Hōko.

Hōjō is a wasteland divided into seven parts: six rocky valleys surrounding Hōrai. This layout gives Hōjō the appearance of a six petal flower. The region is covered in a thick mist that makes it hard for foreign travelers to navigate. Interestingly, the six valleys are laid out with rocks stacked together on the ground, which is later revealed to have been done by the Sōshin.

1,000 years ago, an immortal race known as the Hōko inhabited a village in Hōjō and lived peacefully. However, after the villagers underwent Arborification, the village was left in ruins. Years later, Hōko and Mei became the only known people to live in the village.

The village in the past. 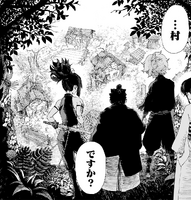 The village in ruins seen from Gabimaru's group.

Retrieved from "https://jigokuraku.fandom.com/wiki/H%C5%8Dj%C5%8D?oldid=7710"
Community content is available under CC-BY-SA unless otherwise noted.