Gui Fa (, Gui Fa (Guì Huā)?) was one of the seven members of Lord Tensen, as well as a partial ruler of Kotaku. They wear the title of Decorous Monju Koukō (文殊公々, Monju Koukō?) as part of a façade to maintain control over the Hōko.

Gui Fa has short, yellow ochre colored hair, and blue eyes. Unlike the other Tensens, Gui Fa is unique in that their eyes are permanently surrounded by dark sclera. Because of their shyness, Gui Fa is almost always seen keeping their face concealed by a book. They wear white robes with their sleeves fasten to their wrists and a hakama tied together with an obi bearing a gem.

After expending their Tao trying to protect the Basin, Gui Fa's body became reduced to that of a child's.

Gui Fa after the events of the Hōrai Arc. 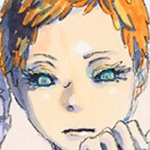 Gui Fa's face close up in their combined Yin and Yang form.

A clone of Gui Fa in their Yin form.

A clone of Gui Fa in their Yang form.

Gui Fa covering their face with a book.

Gui Fa as they appeared 200 years ago.

Gui Fa keeps their self calm and composed but is extremely shy around others, preferring to cover their face with a book at all times to make sure that no one sees them. According to Mei, Gui Fa was shy even in the past and has noted that it has gotten worse over time. After confronting Sagiri, Gui Fa desperately tried to make sure that Sagiri did not try to make eye contact with them by shifting their position. The only rare times Gui Fa is willing to show their face to others is if they were to engage in important matters or make a bold statement.

As a Tensen, Gui Fa has no sympathy towards humans and only sees them as material to create Tan. Gui Fa even admitted that they believe that their kind and humans are incapable of coming to an understanding as that they found Sagiri's attempt at a negotiation to be pointless. They also believe that as a Tensen they harbor no feelings of emotion, such as wanting to form bonds with others, and that they and the other members of Lord Tensen (including Mei) are only beings that are meant "to seek the way". After being notified that four members of Lord Tensen were defeated by the human survivors, Gui Fa stated that they did not feel a sense of vengeance and only took their passing as part of their training. Although this was the case, after hearing Mei explain how she learned what life meant during her time with Hōko, Gui Fa did admit that they felt a sense of envy towards her.

Unlike the other Tensens (with Zhu Jin as an exception), Gui Fa prefers to take the Middle Way in that they do not side with one gender. As such, Gui Fa maintains a body that showcases both sexes. Because of this point of view, Gui Fa finds the Bōchū Jutsu training to be ridiculous and believes that their method is more effective.

1,000 years ago on Kotaku, Gui Fa and the other Tensens were created from the Tao of Xu Fu and Plant Tao for the purpose continuing on his research of acquiring immortality. The six then began their training under Rien's tutelage and were each assigned one of the five forms of training in immortality, with Gui Fa being assigned in the realm of Shu'itsu. They were also introduced to the Hōko as tools they could use to replenish their Tao. However, after 200 years passed, the Hōko started undergoing Arborification and left the Tensens at risk of dying if they were to run out of Tao. During a meeting, in which Ju Fa expressed his frustration to the others, Gui Fa presented their idea of using the humans from the mainland as another source of Tao. Mu Dan and Tao Fa took this idea into consideration and sent a Arborified Hōko as bait to lure in humans to the island.

Gui Fa joins the other Tensens in a meeting to discuss about the humans that made landfall. Once Ju Fa and Zhu Jin confirmed that the humans they encountered were dealt with, the Tensens toast to their longevity and to Soshi.

After Rien allowed one of the humans, Aza Chōbē, to ally with Lord Tensen due to having special Tao that could complete his research, Lord Tensen introduces to him the Hermit Ascendance Ritual.

Lord Tensen then gather and are informed by Chōbē about the remaining human survivors and their plan of invading the palace to acquire the Elixir of Life. Knowing that they plan to make their arrival at the palace, Rien initiates the Rite of Just Consumption and have the Tensens place in their respective temples.

Later, Gui Fa takes Rien's place in guarding the ritual circle while he prepares to depart to Japan. Gui Fa then encounters Sagiri and Mei after the two enter into the Rentan Temple. Gui Fa warns them not to take a step or they will be force to attack. Gui Fa tells them about Rien's whereabouts and explains that the ritual circle will be able to tell her of the current status of the humans. Sagiri then reaches for her sword, causing Gui Fa to direct their Tao towards her and force Sagiri on her knees, demanding that she remove her hand. Sagiri explains that she does not wish to fight but to apologize on behave of the humans that trespassed on their territory and wish to cease the fighting by allowing her allies to return home. After noticing how her Tao reacted, Gui Fa honors Sagiri's request but tells her that it will all be pointless once they return to Japan and explains by creating an illusion using their Tao. Gui Fa tells them that Rien plans on using the Paradise Butterflies to spread across the land ad turn every human into Waitanhua flowers to form the giant Banko, creating more perfected Tan in the process. Sagiri asks why they would go to such lengths, to which Gui Fa answers that they found humans to be valuable material ever since they first landed on the island and are now depended on them on achieving immortality. Gui Fa also says that it was meaningless for Sagiri in trying to come to a mutual understanding with each other and that all the two sides can do now is kill each other. They then look towards Shion's talismans which starts to burn, indicating that his life is slowly diminishing.

After the ritual revealed that all the Tensens were defeated, Gui Fa prepares to go to the floodgates to report back to Rien with no intentions of fighting Sagiri and Mei or avenging their comrades. Before leaving, Gui Fa asks Mei the reason as to why Mei decided to come back to Hōrai after so long, to which she answers that she had finally come to understand what life was. Upon hearing this, Gui Fa stated that they envy her. The three then suddenly feel the palace starting to shake after the second landing party made their arrival, to which Gui Fa remarked that it was not a good sign. Gui Fa then reports back to Rien that the Tensens have been defeated, the Rite of Just Consumption has failed, and another party of humans have arrived in Hōrai. While having the Dōshi take care of matters outside, Gui Fa is ordered by Rien to go to the Main Temple Annex to protect the Basin. After arriving and taking a look at the Basin, Gui Fa questioned if the item was really Rien's true objective.

After the ending of the Banko's rampage, after Zhu Jin assimilated themselves with it, Gui Fa's body is mysterious reduced to a child's and steps outside holding the Basin where they encounter Mei and Yuzuriha.

As one of the rulers of Kotaku, Gui Fa has partial authority over everything that went on and could command the Dōshi, Mōnshin, and Sōshin.

Gui Fa possesses Metal-attributed Tao and has complete mastery over it. After spending 1,000 years of training, Gui Fa's Tao has been greatly refined where others could view their abilities as god-like. With its use, Gui Fa can sense the presence of others, the movements and weak spots of their opponents, and enhance their physical attacks.

By releasing and targeting their Tao, Gui Fa is able to make their enemies fall to their knees from the pressure they emit and diminishes their ability to move, as if gravity is pulling them down from above. They also have the ability to create illusions using Tao.

As a Tensen and a consumer of Tan, Gui Fa possesses regenerative abilities and immortality to a certain degree. Gui Fa's regeneration can only be nullified if they were to face an opponent that possesses the Fire-attribute and the only known way of killing them is if the said Fire-attribute user completely destroys their tanden.

Gui Fa is able to switch chi's of either Yin or Yang to augment their Tao and recover any lost. As Gui Fa switches in and out, their sex changes to match the chi, which is put to use whenever they engage in Bōchū Jutsu training. However, Gui Fa has found a way to gather up more Tao by combining their Yin and Yang forms so that the chi cycle will continue to flow.

Retrieved from "https://jigokuraku.fandom.com/wiki/Gui_Fa?oldid=8829"
Community content is available under CC-BY-SA unless otherwise noted.